“Restless Matter" is an online art project by Ferruccio Ascari. Installations and sculptures from different periods of the artist's production become the starting points of a series of video works, progressively published on this website. As in much of his work, here the artist proceeds with variations, tackling ever present questions through ever changing languages. 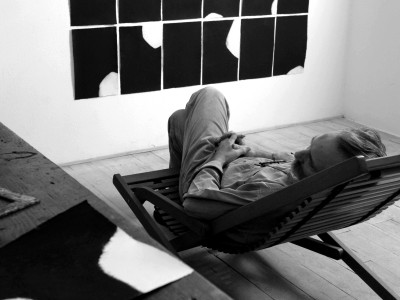 Ferruccio Ascari (b. 1949) lives and works in Milan. After his degree in Philosophy in 1973, he became interested in Eastern thought and particularly the Yogic tradition, in a way that has deeply informed his artistic practice. In the mid Seventies, while traveling frequently to India to expand his knowledge of the discipline, he debuted as an artist—spanning a wide array of media, from painting and sculpture to site-specific installations at the crossover of visual and time-based arts (music, dance and performance). During those years, the artist's work gained international attention and he took part in prominent exhibitions such as the Venice Biennale and the Biennale des Jeunes of Paris. From the mid Eighties, he dedicated himself mainly to painting and sculpture, exploring the properties and transformations of materials, and particularly to the technique of the fresco transferred onto canvas. In recent years, Ascari's latest series of works—including charcoal drawings, perforated paper works, and sculptures in iron and terracotta—testify to a shift from an anthropocentric perspective to one that embraces nature's forces and cycles, pursuing an investigation on the origin of form and the perennial dialectics of permanence and change.
Ferruccio Ascari's work has been exhibited internationally in public and private institutions, such as Galleria d'Arte Moderna, Rome; Rotonda della Besana, Milan; Palazzo dei Priori and Pinacoteca, Volterra; Castel Sant' Elmo, Naples; Symposium international d'Art Performance, Lyon; Lenbachhaus, Munich; International Biennal of Graphic Art, Ljubljana; Museum der Stadt, Waiblingen, Museo d’Arte Moderna, Ascona. www.ferruccioascari.it